Here is an article about Twitter that was in the Wall Street Journal Today.

If you’ve heard of Twitter but don’t exactly know what it is or how it works, you’re in good company. In the past two months a bunch of my friends, ranging in age from early 20s to late 30s, have asked me about Twitter — or Tweeter, as one person accidentally called it.
To clear things up, I’ve put together a basic Twitter guide that explains how to use it, Twitter lingo, privacy options, mobile applications that can be used with the service and problems that it has. Let’s get started. 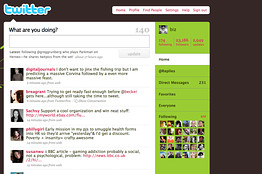 One response to “Twitter Article in Wall Street Journal”

This site uses Akismet to reduce spam. Learn how your comment data is processed.